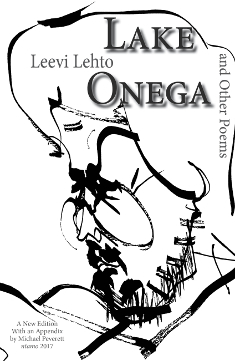 This selection, first published in 2006 by Salt in UK, traces the development of Leevi Lehto’s later poetry -– from the "imagist" early 90’s work through the metrical experimentation of the Lake Onega sonnets (1997) to the procedurally oriented poetics of the 00’s.

Most of the texts are translations, all of them tests of translation, while some may offer themselves as exercises in Second Language English Literature. This edition features an essay by Michael Peverett as an Appendix that puts (almost) all in perspective.

"An adventurous, witty, impertinent and intense book, teeming with sprezzatura [...] that takes the measure of contemporary experiments from the objectivist to the flarfiste." -– Rachel Blau duPlessis

"[...] a captivating document of inter-lingual poetics mapping a future that will increasingly be where poetry happens." -– Jed Rasula

"I suppose some non-Finnish readers might assume that Lake Onega is a lake in Finland: it is not. It is a big lake in Russian Karelia. Nevertheless, the foregrounding of this lake is turbulent with political resonance in a Finnish context. [...]. But how does Lake Onega manifest itself in the sonnet sequence to which it gives a title? In the most deadpan way imaginable: as a word." -- Michael Peverett